You are here: Home » Walking » Sierra Bernia Summit and Circuit

A superb mountain circuit with an optional ascent of this spectacular peaks highest summit. Visit mountain springs, an ancient fort and even a tunnel through the mountain! The Bernia Ridge dominates the view East from Abdet and Guadalest with its Matterhorn like profile. In reality it a long ridge which also provides a mountaineering challenge (ropes needed) like the Cuillin Ridge in Scotland. You can drive up to the Alpine style settlements high on the flanks of the mountain via a narrow road.

Access: The best option is to drive to the top of the narrow road leaving the main Callosa - Altea Road near Alahma Springs. The easiest identification for the turn off is to look out for the large statues next to a small stall that sells seasonal fruit and vegetables.

This walk is one of the ones we do on our guided walking holidays.

Follow this narrow road (any turn offs can be ignored - they all lead to dead ends pretty soon) and after a few kms it climbs dramatically until you reach a collection of small houses. Either park next to an animal drinking trough near the houses or follow a turn off with parking signposted to a small picnic area.

The route: Follow the obvious track past the houses then past a low square building which is a disused water tank. The track leads into a good footpath and after a few bends you arrive at a small font with a gated door to keep animals out. Carrying on past the font the track splits - keep heading away from the font (West) crossing a scree filled shallow gulley and then some steeper sections lead you to a broad shoulder with good views of the fine upper slopes and cliffs. Easy going takes you along to the remains of what once must have been an impressive fort. Although it was demolised over 300 years ago as it was not as impregnable as it perhaps seems! The Aerial shot opposite allows you to make sense of what seems like a chaotic collection of walls and ditches. On the slopes beneath the fort is a fine font with drinking trough.

Optional ascent of Bernia main summit - some scrambling (2 hours return):
If you wish to accept the challenge of the main summit you now need to gain the small path heading towards the obvious scree slope to the North. The easiest path is on the left of this slope, and is well marked by red dots when you reach the steeper ground. It is never hard but is exposed in places once on the the ridge. After an exposed section the the remainder is pretty easy (go around to the North side for the easiest path), and soon the summit cairn is reached. Enjoy the superb views in all directions including the Penon at Calpe to the East, The Puig Campana and Sanchet to the South West, and the unusual stratas of rock that form the ridges to the North. Retrace your steps to the fort.

Beyond the fort the path widens as it heads north and develops into a narrow track underneath the Western slopes of the mountain. Gradually descending as it heads around to the North side of the mountain and reaches the a collection of houses as Casa Bernia. The largest house is actually a small bar/restaurant that is open on most days and serves good value food.

Leaving the houses the track is followed East, passing carefully cultivated fields of vines and soon reaches a large font beneath a huge boulder. Climb the steps to gain the continuation track which is now quite narrow and climbs steeply in places to reach the impressive cliffs on the approach to the Forat (tunnel).

The remarkable natural formation of the Forat takes you back to the South side of the mountain. The contrast in plant life, temperature and secenery on either side of the20 metre tunnel is also dramatic. You won't need a torch, but the tunnel is low enough to force you to stoop, or even crawl.

Now the way on contours and gradually drops from the Forat, traverses an impressive boulder field (with a couple of awkward steps) and heads back towards your starting point. Do keep an eye on your route though as the path here is not too obvious in places. It's easy to go off route just beyond a large tree where you reach a broad rock filled gulley. At this point the path climbs slightly, even though there is an obviuos path dropping into the gulley. Shortly after this the track does split and you need to take the left fork and drop down to join your outward route (turn left) and descend to the font with the door on it. Your mountain circuit is complete 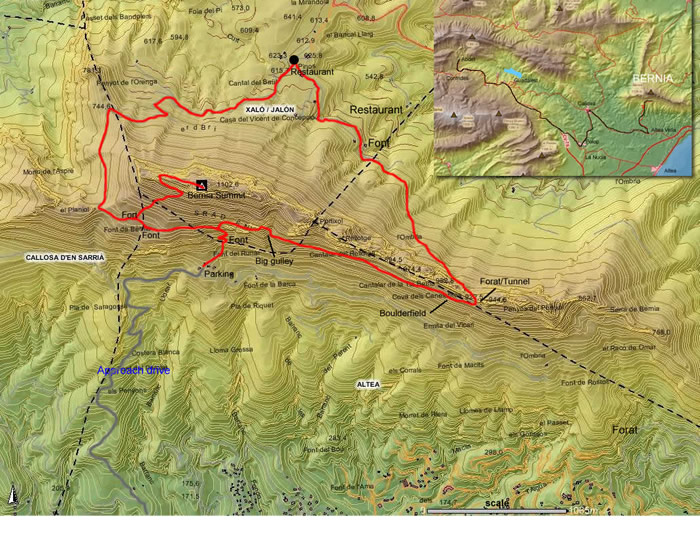