A very interesting walk of approximately 8 miles with lots of variety, it retraces the ancient route taken by the locals who brought ice down from the summit of Pla de la Casa Snow Hole (Nevara) to Abdet, the villages in the valley, and the coast. The snow industry was at it's peak between the 16th and 19th Century It did continue into the 20th Century, but with the invention of electronic refrigeration it became uneconomic.

The Kingdom of Valencia was one of the main consumers of ice Spain. From the port of Alicante snow was even exported to Ibiza and northern Africa. The coastal cities had hot summers, and nearby lagoons encouraged mosquitos. The resulting diseases were treated by ice. Some think the consumption of ice encouraged economic and cultural development.

The most common therapeutic uses of ice were to lower the temperature of those with fevers (particularly those caused by cholera) , ease headaches (particularly meningitis) , stop bleeding, and as anti-inflammatory for sprains or fractures.
The progressive introduction of ice plants from 1890 in various cities caused a pretty sudden end to this industry. Until then this natural resource (renewed each winter) was quite sustainable in what was a cooler climate to today. Although there were poor winters and an example of this was documented by Ferré and Cebrian "on 5 and 6 March 1762 , 1,000 people and 700 horses struggled in the Red Font Carrascar and Menejador ".  More info on our snow wells history page.
Head out from Abdet on the Narrow road at the NW end of the village, past the basketball/football pitch and after a slight dip take a track on the left up towards an imposing rock pillar. (Abdet Pillar which features some good sports climbs)
You will come onto a section of well built path, which zig zags up to a slight gap in the rock, then traverses with good views down into the upper Abdet Canyon with some ruined mills. The good path runs out and you have to follow a narrow trail up to teh left through trees, and then to a clearing, bear left to reach a low stone building (kennels) and then onto a good track.
Follow this bearing left at any junctions and this leads down to a small stream (sometimes dry). Follow this for a short distance, but look for a square (empty) water tank on teh other side of the stream, and some cairns, which indicate the point at which the path heads up away from the stream,and up to a path junction. Follow the signs for RIncon Olvido - Serella. You pass beneath a couple of rather eccentricl looking houses, and back onto a larger path, again follow the signs for RIncon Olvido - Serella when you come onto a vehicle track.
This zig zags up the slopes of a wooded hillside, but don;t go to the very end, look out for a cairn on one bend, and also a line of rocks laid across the track. The path descends slightly and is not very obvious in places, but there are cairns about every 30 metres, so back track if you loose the track as it is the only way up the hillside. If you try and head directly through the gorse and dwarf oak thickets you will be ripped to pieces!
The narrow path weaves it's way up the now overgrown slopes of Raco de Llosa. 60 years ago when the population in the area was at it's peak this would have been overgrazed and barren, but nature is reclaiming the hills around here, there are just a few herds of goats and  some wild boar that now have plenty to graze on.

The angle of ascent eases as you aproach the top of the climb, bear left here and follow occasional cairns and feint tracks which lead to a ridge up on your left. You can follow this along the very top, or on it's right hand side. ahead, on yoru right you can see the path descending the scree slopes from Pla de la Casa, where the large snow hole is built. Once at the next col you have the choice of heading up over this route, or traversing by better paths around the Southern flanks of the mountain. Both are excellent routes.

A) Pla de la Casa Sunmmit and Snowhole - from the path junction at the top of the ridge head north across rougher ground and then up past a square pinnacle to the final steep ascent to the plateau where the large impressive snow hole is situated. There is an optional ascent to the exposed summit with it's iron cross and visitor book. The final few metres involve a short scramble but is well worth it for the great views. The route continues up to another plateau to the west, before a steep descent back down to the lower level route. In hot weather you may want to make the short descent to the spring (font) at Font Roja, a short way down the path towards Famorca. Otherwise head back onto the broad forest track that then makes an ascent up to another col.

B) Southern Traverse -  from the path junction at the top of the ridge head east onto a good footpath which traverses up to another col and then crosses the boulder strewn flanks beneath impressive pinnacles and rock faces. You pass a massive boulder that is worth exploring, it has a sheperds shelter built at one side, and a it is worth noting the flowstone features on it's surface now tilted horizontally. Continue traversing after the boulder until youreach another col and the start of a vehicle track. Follow this to a junction, in hot weather you may want to make the short descent to the spring (font) at Font Roja, a short way down the path towards Famorca. Otherwise continue the broad forest track that makes an ascent up to another col.

The routes rejoin at this point. There is a little used track heading down just to the left of the main vehicle track. it is possible to go this way, but the better option is to head south up towards the rocky ridge through the trees, and once at the base of the cliffs then follow a vague track down under the crags in a south-westerly direction. Eventually you will come to an easy scramble across slabs that leads to the impressive V notch, which is known as a coll del contador (counters pass), goats would be herderd through here and could be easily counted by the sheperd,

There now follows a steep descent, take care to stay on the path which at one point heads quite a way to the left before making its final steep descent to a broader track and a 5 way path junction. The first turn to the left will take you back to the bottom of the climb you made earlier in the walk, the most direct way back is to take the 2nd junction, almost straight ahead which then descends down gradually past another one of the areas self built houses and then onto a footpath. Look out for a sharp turn to your left that takes you down to the small stream you passed earlier in the walk. A bit further on you will rejoin your outward route, and you can then retrace your way back to Abdet. 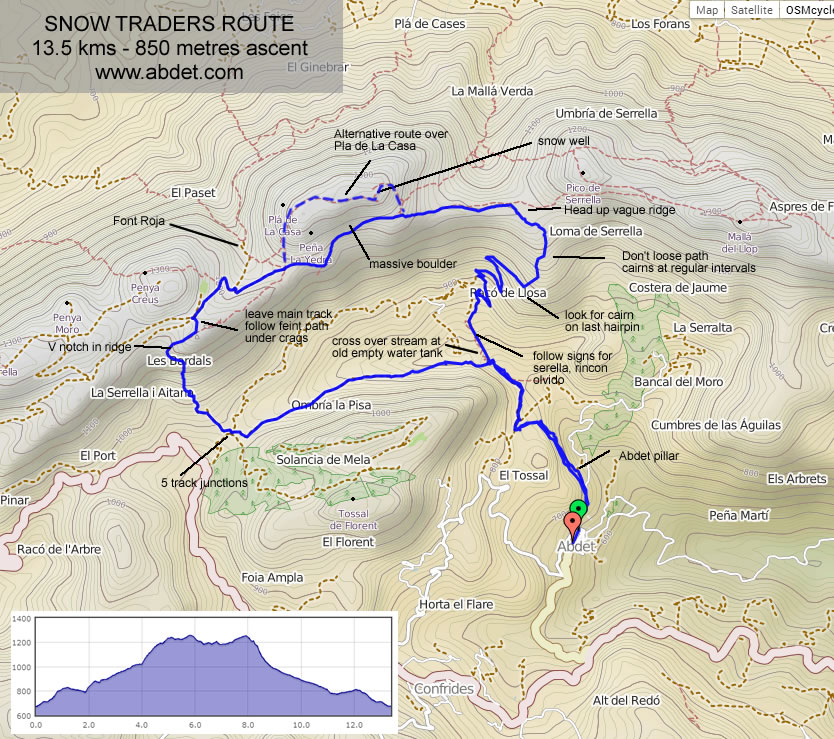