Distance 8kms  - Sanchet is almost a hidden mountain. It is composed of huge fins and butresses with some steep terraces in between. There are only three possible ways onto the summit apart from long rock climbing routes. This is a challenging mountain walk, although short in distance.

Approach; Simliar to that of the Sanchet Circuit - heading to the coast on the CV70 from Guadalest the road drops steeply. Towards the bottom of the hill there is a wide cutting with stone walls on either side. Turn right immediately at the end of the stone walls and follow the surfaced track up to it's end and in all but wet weather continue along the unsurfaced track until it is possible to park next to a farm building down to the left of the track 3.5 kms from the main road. If you come to the brightly painted house you have gone too far.

From the parking place continue along the track to the brightly coloured house and then follow the signposted track towards Finestrat for 20 minutes or so until you come close to some shattered cliffs a couple of hundred metres before the track ends. (see photo). go slightly past the gully and then head up to the base of the cliff and find the best way between the bushes back to the gully. There are two short sections of easy scrambling here, up the back of the gulley. Up above you there is a group of large trees in the gulley. This is what you are aiming for. We found the best way on to be on the left of the gulley to start with, then on the right heading for some old terraces. There is no worn track as such, so look ahead and plan your way carefully and you shouldn't get stuck in any of the sharp gorse bushes! On one walk we were surrounded by a group of Dartford Warbellers (beautiful small birds with a long tail held up at a very steep angle) flitting through the bushes.

Above you there is a section of scree, head for this and pick the best way up the steep slope as you come closer to the base of the impressive rock buttress on your left (The Eastern butress). We found a reasonable route by traversing across the slope to this butress and then up to the the top of the slope to a point where you would be able to walk along the top of the buttress (good views). You now get a clear view of the summit of Sanchet which from here appears as an impressive rock dome.

Now f ollow along (traversing) reasonable but intermittent paths across terraces towards rock walls and then on to the obvious broad col with great views down over the El Realat ridge near Sella.

Now you head to the far end of this col and make for a scree trail on the steep slopes of the summit of Sanchet. Follow this steep slope with a vague path to the left of a steep wall until you can scramble up to the ridge. Now keeping just right of the ridge find a zigzag route which takes you almost to the very summit. The small cairn that marks the summit is the ideal place to take in the great views in all directions. The easy route up the Ponoch, the "back" of the Puig Campana, the El Realet ridge, Divino, Aitana, Serella and Pena Roc are all in clear view. Also you will now see the obvious ridge that marks the way on. There is no real path still as your route takes the left side of the Sanchet ridge. Follow this by the easiest route until you start to descend a steeper scree slope. At the base of this it is possible to keep heading down and left until you are level with the base of a steep rock face (on your left). Now pick your way down the steep slope until your reach the footpath at the base of the scree and rock slope. (it is possible to continue to the very end of the ridge, and join the footpath at the ruined house).

The footpath is a pleasant change from the rough ground of the ridge, it takes you to Col de Llam and the easy descent back under the impressive rock faces of Sanchet. It is satisfying to know that you have traversed above these sheer rock faces.

Follow the path down until you return to the the bottom of the steep gully near the start of the walk. Carry on down to your starting point. 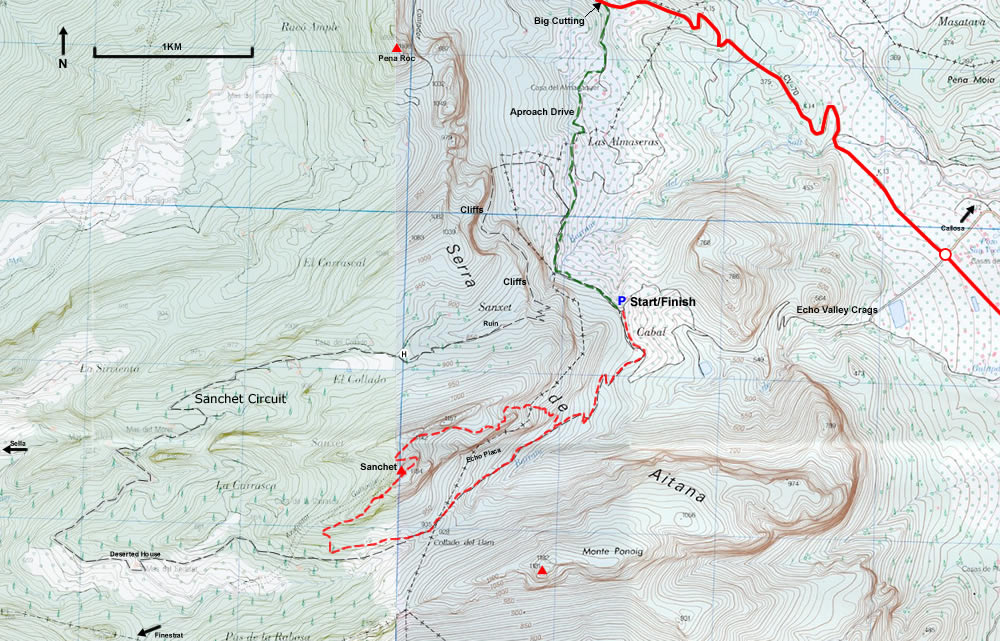