5km - 300 metres of Ascent. This makes a great half day walk with some easy rock scrambling. It does have a steep descent but the views from the summit ridge are superb. It could be made into a longer days walk by approaching along the quiet approach tracks near Guadalest.

Approach: You can walk from the main road junctions but the walk is just as good if you drive up the surfaced road signposted El Trestelador Restaurant, a short way out of Guadalest (heading for the coast). Follow this narrow road, turning left at the T junction, it turns in to a rough track after a short while. Park in one of a few possible places on the side of the track, just near a small quarry above the track , and before an impressive steep orange rock wall with caves in it's base.

Follow this track up steadily, underneath more rock walls and pinnacles (these form the Northern slopes of Peña Roc) until you reach the Paseo de Comptadores (counters pass) . This is quite a common name for passes where they used to herd sheep and goats through narrow gaps, counting them as they went. Unfortunately this one has been blasted to give access for vehicles. It used to be a narrow slot just wide enough for people, mules, etc to pass through.

Enjoy the views of the varied rock scenery, and now views towads the coast at Altea and Calpe. You are now at the head of the Barranc de Arc valley that descends all the way to Sella. However a few metres after passing the footpath signpost you need to head on a very feint track on your right, this skirts under the rock walls on the Eastern side of Peña Rock. The path is marked by the occasional red dot. Look for short scramble up to a rocky ledge, follow the red dots up another broad gulley and after a few further steep sections you arrive at two small cairns.

You have a choice of routes here. The easy way is to traverse around the ridge to the South side of Peña Roc, dropping slightly to pass a smooth rock wall before climbing again (on a path well worn by goats), after this head up and then back right to reach the summit ridge (this is the main route shown on our map) . The more direct way from the two cairns is to follow up the steep rock wall on the North side of the ridge until at the head of the gully you scramble up on the left side to reach a shallow col just next to the summit (shown by the dotted line on the map) . Which ever route you take you will be rewarded with great views, back down to the Passeo de Comptadores, South to Aitana, East to the Puig Campana with it's obvious notch, and North to Guadalest and Serella.

In fair weather you can scramble along the very top of the relatively broad ridge as you head West, eventually though you will join up with the track as it gradually decends, passing some deep notches with views down to the Guadalest Valley, Callosa D'en Sarria and the Bernia Ridge. Keep descending until you reach a point where the path starts to climb again. Here look for a very small cairn and path leading of to the right and towards some trees. This will take you back down to your starting point. The path is very feint and almost seems to disappear in places as you negotiate trees, bushes and the occasional rocky step. After you pass some impressive white cliffs it drops down some fine scree towards some almond terraces.

At this point there are several routes,so be prepared to back track if required! The best way is to bear right towards an impressive crag (above where you parked) look for the occasional cairn and when you arrive on the terraces walk to the Eastern end to rejoin paths and tracks back down to your starting point. It is also possible to head in a more North Easterly direction towards an old quarry. 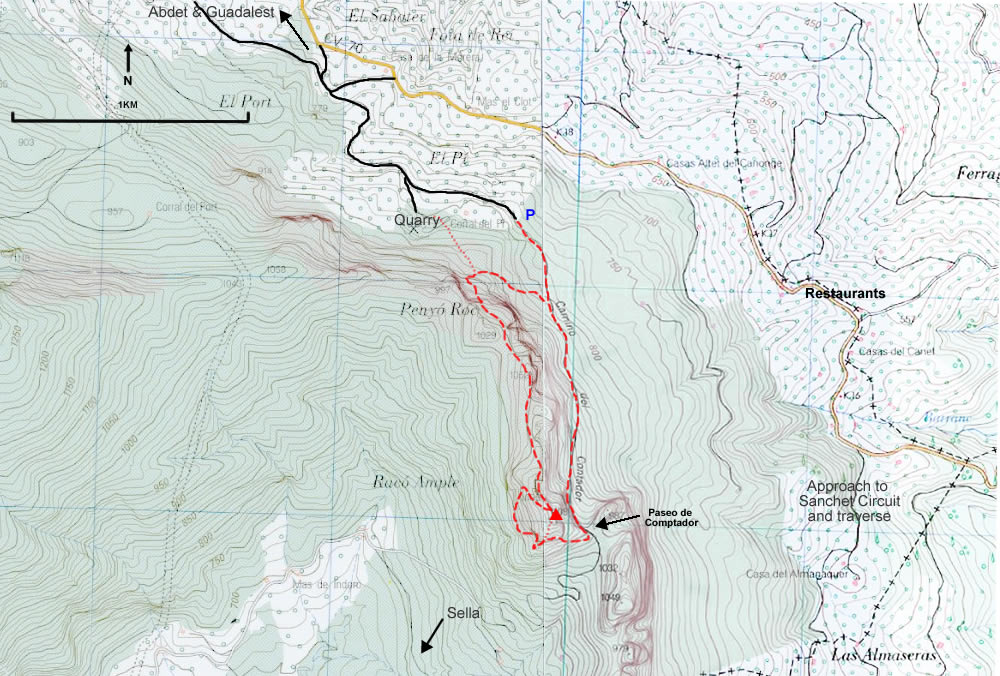