A long and rewarding day out on the Serrella ridge. The easy start along the rural road down to the reservoir means you get a few kilometres done before the first big climb of 2,000 feet (600 metres). Whilst heading up the zig zag track to the ridge look for the the castle of Serrella perched on the impressive fin of rock above you. It's worth making a detour of a couple of hundred metres up to the castle remains with it's level grassy surface that is perfect for a picnic! You will also find a remarkably intact water tank, still holding water many centuries after it was built. Descending from the castle you will see the unusual valley of Mala de Llop ahead of you. It looks like a glacial feature, but is just a trough between two massive ridges of limestone. It's scale is very deceptive as it is over 1km in length. As you descend into this valley you can't fail to be impressed by the massive rock walls on either side as you climb the 1,000 feet (300 metres) to the col at the head of the valley.

Next comes a rising traverse through the dome shaped spikey clumps of hedgehog grass, which like most plants up here get most of their moisture from water vapour rather than rainfall. After following the crest of the ridge for a short while the route now drops down under some impressive cliffs and a good traversing path. The peak of Pla de la Casa  is bypassed on the left by more good traversing (check out the huge fallen pinnacle that is now a shepherds shelter) and in hot weather a visit can be paid to the tap at Font Roja for a well deserved drink of cool mountain spring water. It's not far now to theV notch at Contadores pass and a descent into the Sombria Solano valley where a choice of routes will take us back on gradual descents to Abdet and welcomed refreshments. 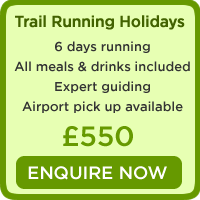