You are here: Home » History & Culture » Snow Wells and Nevaras

These constructions were used to store snow that was later sold to the nearby towns. Most were built at the beginning of the 18th Century, and many had a masonry dome built on top of two or more temporary arches.

Within the Well, the snow was compacted by stepping on it. When a hard snow layer of a metre or so was obtained, it was insulated with a layer of dried grass. Once full a heavier layer of material would be added and the doors sealed carefully. 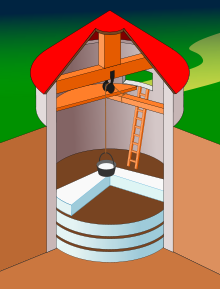 Snow Wells - Neveras With the arrival of the summer period (and in special in the two celebrations of the summer: the 25th July and the 15th August) the snow was extracted from the well for the manufacture of refreshments and ice creams, and was transported by large teams of mules or donkeys during the night to reduce the losses.Snow has been used to preserve foods, to keep drinks cool and for medical purposes for 4,000 years or more but it was between the 16th and 19th Century that this industry reached its peak in this area. This period was especially cold and rainy and snow became a popular item of consumption. The snow wells fell into disuse towards the end of the 19th Century with the advent of industrial ice.

The Kingdom of Valencia was one of the main consumers of ice Spain. From the port of Alicante snow was even exported to Ibiza and northern Africa. The coastal cities had hot summers, and nearby lagoons encouraged mosquitos. The resulting diseases were treated by ice. Some think the consumption of ice encouraged economic and cultural development.

The most common therapeutic uses of ice were to lower the temperature of those with fevers (particularly those caused by cholera) , ease headaches (particularly meningitis) , stop bleeding, and as anti-inflammatory for sprains or fractures.
The progressive introduction of ice plants from 1890 in various cities caused a pretty sudden end to this industry. Until then this natural resource (renewed each winter) was quite sustainable in what was a cooler climate to today. Although there were poor winters and an example of this was documented by Ferré and Cebrian "on 5 and 6 March 1762 , 1,000 people and 700 horses struggled in the Red Font Carrascar and Menejador ". The mountainous relief and the lucrative commerce of snow was the cause of many snow wells in the Sierra Aitana and today they make up a very important part of Valencia's heritage.

There are several walks and bike rides on which you can see these impressive structures. The best local ones are beneath Sierra Aitana and on Pla de la Casa.